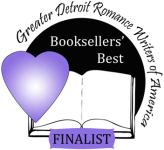 Demons Are A Girl’s Best Friend – Book 2 in The Realm Series! 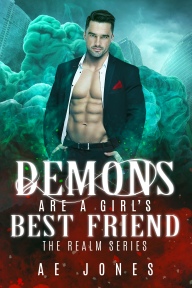 Aleksei Chesnokov is one busy demon. Between leading the immigration team to bring realm demons to earth and preparing to one day succeed his father as clan leader, his priorities and current project plans do not include finding a mate.

When his clan is attacked by the very demons he’s trying to help, Aleksei must enlist the help of Naya, the leader of the realm guard. A strong, determined, frustrating female, she challenges his decisions and acts before she thinks.

As they work together to stop an impending war, Aleksei is drawn to Naya and the world she protects. When she’s taken hostage, Aleksei will move earth and the realm to save her. Because with all his agendas, checklists, and timelines, the one thing Aleksei never planned to do was fall in love.

“AE Jones’ one liners are great, her characters are very three dimensional, and her work as always was spot on.” Julie, The Reading Cafe – October 2018

Aleksei Chesnokov was a demon with a plan. If there was one thing he’d learned in his two hundred and fifty years, it was to have a plan and stick to it. As the future leader of the Shamat clan, he also knew his time would not be his own. Even though Boris, his father, was entrenched in his role of clan leader, and probably would be for the next several hundred years, it paid to be prepared.

He grabbed a towel hanging off the side of the treadmill and wiped his face, maintaining his stride even as he continued his morning ritual. Earbuds in, he listened to an audiobook. He was all about multi-tasking, so he listened while he ran. This particular book was about project planning.

Imagine a project plan is like a triangle. Point one involves setting objectives. Point two is establishing timelines. Point three includes determining cost. Each side of the triangle is necessary to ensure success.

Which made sense to Aleksei. He wished he could convince others of the importance of planning.

Exactly. Aleksei strove for balance. However, over the course of the past three months, balance had become an elusive animal. It all started when he agreed to run the new Bureau of Demon Immigration. He had seen the job as a training ground for clan leader, a logical step in honing his skills. There were only so many business books he could listen to before he needed practical experience. So when he was asked to run the organization, he jumped at the chance.

Plus, how could he not help bring the demon clans from the realm to earth? The realm was a wasteland, a prison for demons who were being punished for a war their ancestors started a thousand years ago. To play a part in uniting the five realm clans back with the twelve earth clans was a weighty responsibility, and he had been proud to step up and assume the mantle.

Now? Now he wondered if he’d bitten off more than he could chew.

The alarm beeped on the treadmill he was pounding into submission, and Aleksei pushed the cooldown button. Within seconds the speed adjusted, and Aleksei slowed his run to a fast-paced walk. He checked the clock on the wall. In a little less than two hours he would be meeting with the team to discuss the next group of demons who would emigrate from the realm.

Not an easy task, since these demons had no concept of earth and what living here meant. Food, clothes, language—hell, even their ability to change into human form—were all foreign to them. And to make matters even more complicated, the Bureau was now dealing with protestors, demons on earth who weren’t happy about the realm immigration plans.

Once he finished his workout and took a shower, he would review his agenda items for the meeting. The machine slowed further, so Aleksei hit the stop button and stepped off.

Next he strode to the side of the room, entering a long, thin hallway with the bullseye at the far end, used for a special kind of target practice.

He could do this. Be the best damn director of the immigration. But he needed to convince Naya, the realm guard leader, that he was not the enemy. If she wouldn’t disagree with him at every turn, things would run more smoothly. If only he could explain the concept of team-building to the stubborn female, but teamwork was not in her makeup.

Aleksei jerked back to the present and the droning in his ears, unsure how much of the book he’d missed by zoning out. Time to pay attention.

Step one in project planning: Imagine your objectives.

Aleksei stared at his palm. Sparks appeared and coalesced into a small ball of fire. Aleksei focused down the target range before releasing the fireball with a quick snap. The ball hit the center of the bullseye. He watched his hand again, ready to repeat the process as bits of fire swirled from his fingertips.

Practice makes perfect, and he couldn’t afford to screw up—both for his sake, and the sake of his clan.